What are we parents to do when our type 1 child/teen has a stomach illness and is unable to keep down the food and drink necessary to avoid or treat a low blood sugar? Besides panic and pray, there’s another tool in our sick day toolbox: mini-dose glucagon.

As a D-Mom I know the stress of my T1D son throwing up his entire breakfast – right after we gave insulin for over50g of carbs. Yikes! That’s when I know we’ll be in for a struggle: keeping his blood glucose up when he can’t keep anything down.

And there’s the time I got a call from a 9-1-1 operator as my husband and I were driving home from a Christmas party. An iron fist clamped down on my heart when she told me who she was, and that she was calling about our then 7-year-old son. He was at home with Grandma and Grandpa, who panicked when they could not raise his blood glucose out of the 3’s (mmol/L) despite five (yes, FIVE!) low treatments. Later, we realized the cause of this unexpected and persistent low when he began throwing up. All night. It’s likely that, even before we could see the symptoms, his digestive system was already in distress; he had probably absorbed into his bloodstream very few of the carbs he had eaten for supper, leading to the persistent low later when all that insulin took flight.

Small-g “glucagon” is a hormone in our bodies that triggers the liver to release stored sugar when blood glucose is trending toward low, thereby helping regulate blood glucose levels (with or without diabetes).

You may have also heard of glucagon in terms of treating a severe low. Capital-g “Glucagon” refers to the manufactured form of the same hormone. (Lilly GlucagonTM (red box) and GlucaGen® (orange box) are the brands available in Canada.) In its manufactured state, Glucagon is a key emergency response when someone with diabetes is having a severe low but is unable to take anything by mouth to treat that low (due to loss of consciousness, or extreme confusion). In this case, a large dose of Glucagon is given (by a loved one, or by the EMT who arrives after a loved one calls 9-1-1) so that the liver dumps a large amount of stored sugar. The goal is to rocket a very low blood sugar into, or even beyond, the target range; safety is a necessity then, not precision.

However, there is a different application of Glucagon, with more precise (“mini”) doses…

Mini-dose Glucagon is the same product (Glucagon® or GlucaGen®) but given in much smaller doses. The goal when using this tool is not to rocket, but to nudge blood glucose into the safe range. Without this tool, when we cannot raise the blood glucose above the low threshold, our only option is a trip to the emergency room for intravenous glucose. Not fun. But WITH this mini-dose-glucagon-tool, under the right circumstances*, we have another (very effective) option between a sick child/teen and the emergency room.

The Truth About Using Mini-Dose Glucagon

Before I tried mini-dose glucagon, I have to admit that I was TERRIFIED at the idea. That small, long, red box that lived permanently in the butter compartment of our fridge screamed at me: “You want the truth?! You can’t handle the truth!” Glucagon was intimidating. Because I had never used it. And because I had heard adult PWD (persons with diabetes) talk about how, when they have a serious low, they wanted to avoid an ambulance call at any cost because of the wicked headache and vomiting they experienced after a shot of regular-dose glucagon. But “glucagon used in these smaller doses does NOT increase the nausea and vomiting that is commonly associated with the larger dose”¹.

Mini-dose glucagon is exactly the same product as that used for a severe low; it’s just delivered in a much lower dose. So you don’t need to keep a separate product around. If you already have Glucagon® or GlucaGen® in your diabetes emergency toolbox, you don’t need to run out and get anything else. (Unless you use it up, as mini-dose or as regular dose – then it’s wise to replace it so you’re ready for another emergency!) 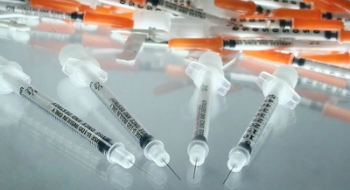 Mini-dose glucagon is mixed just like the regular-dose glucagon: basically you add the liquid to the powder in the provided vial, and shake. Check out the instruction sheet in the box for specifics on how to mix it. (But not on how to deliver it in mini-doses; the in-box instructions are for full-dose use only.)

Mini-dose glucagon is given with a regular insulin syringe, the same way that you give an insulin injection. Even if your child uses a pump or insulin pens, you may want to keep a few syringes in your sick day kit, for the possibility of delivering mini-dose glucagon.

A Few Cautions about mini-glucagon...

For all of these circumstances, which you may or may not be fully aware of, the best first step is always to call your child’s diabetes health care team – they will guide you safely through the next steps of your unique scenario, including dosing amount/timing if mini-dose glucagon is, in fact, an appropriate tool in that instance.

That morning, my son received insulin for over 50g of carbs, ate his breakfast happily, and then threw it all up an hour later, just as the insulin was gathering steam. We tried to replace the has-been breakfast with juice and Gatorade and candy and ginger ale – it all came back up, as his blood glucose continued to fall. So we called the diabetes nurse on call. And only a half-hour after the first injection of mini-dose glucagon, his blood glucose started to climb out of the pits. And a few hours later, after only 1 or 2 other mini-doses, his blood glucose stabilized. It stayed at 6’s and 7’s all day. Confidence replaced panic; I had the tool I needed to keep him safe and it wasn’t difficult to use. Calm replaced stress; we could recover at home rather than stressing over an emergency room visit.

If you’re seeking more information, there is an excellent online resources provided by BC Children’s Hospital, which can be used in conjunction with a phone call to your child’s own diabetes health care team. I encourage you to prepare for future sick days by accessing it now: Mini-Dose Glucagon for Preventing Serious Hypoglycemia. Bookmark it, print it, laminate it, make it your screen saver… whatever helps you to have it handy when you need it.