The Glycemic Index: what is it? why does it matter?

You may have heard the words "high glycemic" or "low GI." But what exactly do those terms mean? Does “low GI” mean a food is more healthy? Here we will define the Glycemic Index for you, and give you some examples of both high and low GI foods. We'll explain the significance of number values, tell you how quickly blood glucose rises after eating high vs. low GI foods, show you which foods are high, moderate or low GI, and explain how can the GI scale can help you manage post-meal BG spikes if you have diabetes.

The amount of carbohydrate in a food (referred to as "carb content") is a key factor affecting blood glucose. However, there are other factors which also affect the blood glucose pattern following a meal or snack, including the quality of the carbs. The quality of the carb affects the rate at which it is digested; how quickly a food is broken down, in turn, affects how quickly blood glucose will rise when you eat that food. The reverse is also true: foods which digest slowly can help prevent blood sugar from rising significantly.

What is the Glycemic Index?

The Glycemic Index is a list of foods with a number assigned to each food. This number, a food’s glycemic index (GI) value, describes how quickly (or slowly) that food will be digested: A food with a low GI value will be digested more slowly than a food with a high GI value; thus a low GI food (such as oatmeal) will raise blood sugar slowly, while a high GI food (such as Cheerios) will raise blood sugar quickly. In short:

According to the University of Sydney website, the global authority for the glycemic index:

“The glycemic index (or GI) is a ranking of carbohydrates on a scale from 0 to 100 according to the extent to which they raise blood sugar (glucose) levels after eating. Foods with a high GI are those which are rapidly digested, absorbed and metabolised and result in marked fluctuations in blood sugar (glucose) levels. Low GI carbohydrates (are digested more slowly and) produce smaller fluctuations in your blood glucose.”

The word “glycemic’ is often tossed around, and sometimes incorrectly. When people say a food is “high glycemic” that’s another way for saying it’s high carb (has a fair bit of carbohydrate content, which will be converted to sugar through the process of digestion, and so will raise the amount of sugar in the blood).

On the other hand, to refer to a food that digests quickly (and so has the potential to quickly raise blood sugar causing BG spikes) the term “high glycemic INDEX” helps avoid any confusion.

Why Does the Glycemic Index Matter? (Part 1)

To start with, the concept of Glycemic Index is very important for matching insulin action to the rate of digestion of a given food, by timing insulin delivery to hold blood glucose as steady as possible after a meal or snack. To avoid post-meal blood glucose spikes, insulin needs to be delivered at a different time for high glycemic index foods than for low glycemic index foods.

In addition, a food’s Glycemic Index (GI) value is relevant in terms of choosing effective treatments for low blood glucose. A fast-acting sugar will bring low blood glucose up more quickly than a slower-acting sugar. In other words, foods with a high glycemic value (such as Sweet Tarts®, Rockets® candy, and Gatorade®) will raise blood glucose faster than those with a lower GI value (such as fruit juice or cola). This is not to say that lower GI foods cannot be used as low treatments, only that the delayed effect on blood glucose should be taken into account before providing a second low treatment for the same episode. 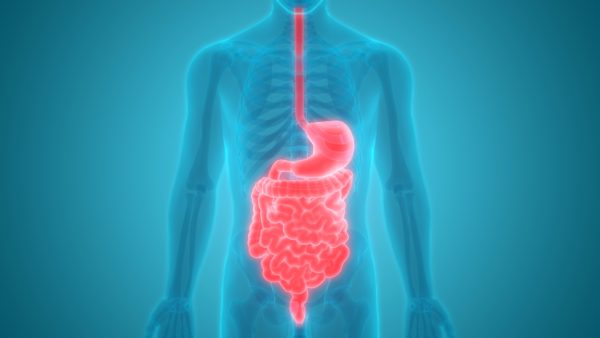 What Do Glycemic Index Numbers Mean?

100 is the GI value of pure glucose, which raises blood glucose very quickly, and is the standard against which all other foods are compared. When you look at a glycemic index list, the number beside each food indicates how quickly that food will raise your child’s blood glucose.

Further, values are broken down into three categories:

The global authority on GI values (and the source of the testing that created the lists) is The University of Sydney, Glycemic Index website.

There is also a comprehensive Glycemic Index list from David Mendosa (medical writer, advocate, and consultant specializing in diabetes) that I find valuable.

For a simple reference guide of common foods sorted into High, Medium and Low GI categories, here is an excerpt from Diabetes Canada's Glycemic Index Food Guide:
(*Though the guide suggests Choose Most Often / Choose Less Often / Choose Least Often, this suggestion applies to those who want to follow a Low Glycemic Diet. Our goal as parents of a child with type 1 is instead to be aware of the GI level so that we can match insulin dose and timing to the rate at which foods will raise BG.) 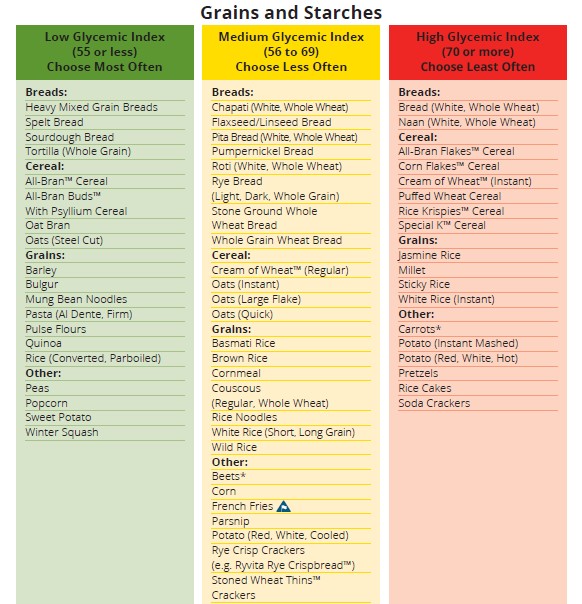 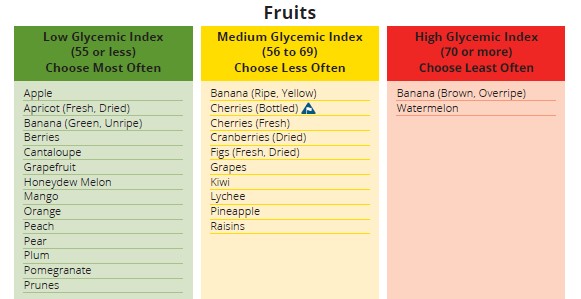 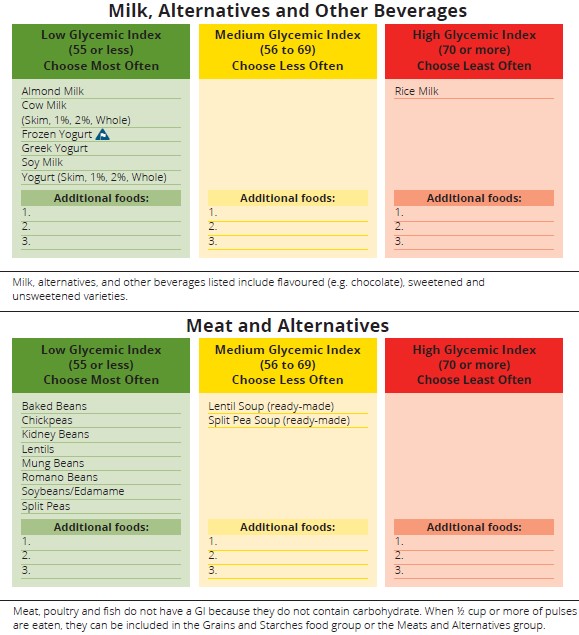 Here is a list that we created of common foods and their GI values: 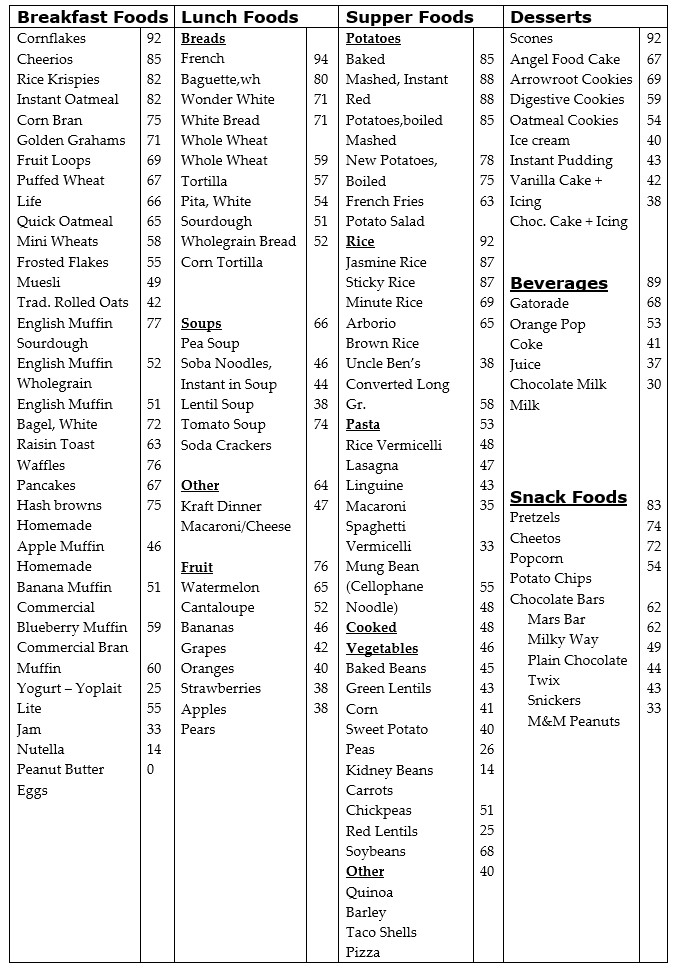 As the graph below (from Gary Scheiner’s book Think Like a Pancreas) shows: 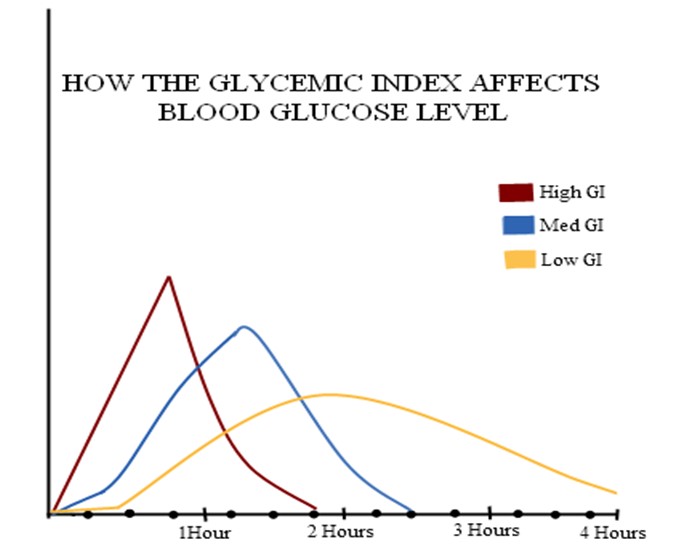 As is universally the case for type 1 diabetes, when eating any type of food the goal is to match insulin action with the rate of digestion of the food, so that there is the right amount of insulin, at the right time, to cover the food.

We need the right amount of insulin at the right time

You may find that it works great for most meals to deliver the regular meal bolus at the usual time (about 15 minutes before the start of a meal), which in many cases provides enough insulin, at the right time, to minimize post-meal spikes, without providing so much insulin that blood glucose dips too low. The insulin action curve of today’s rapid-acting insulin most closely matches the rate of digestion of moderate GI foods, which is why you may find that things work out fine when your family is eating a moderate GI meal.

On the other hand, “the usual” bolus (in terms of amount and timing) when given with a low GI meal typically results in initial low blood glucose followed by high blood glucose later. Why would this be the case?

When your child eats these foods that are low on the glycemic index, the insulin is getting in before the food is fully digested; there is too much insulin present right after the meal, when only a small portion of the food has digested, and not enough insulin present later, when the glucose from the slowly-digested food has reached the bloodstream.

For this reason, it is important to be aware of the glycemic index of different foods, so that you have a possible explanation for unpredictable post-meal blood glucose patterns, and also so that adjustments can be made in the timing and structure of meal boluses, if you choose to do so. If you notice that your child’s blood glucose first drops low and then spikes a few hours later after eating certain foods (such as pasta, brown rice, beans/lentils, apples, pizza), this may* be due to the fact that they are low on the glycemic index. (In contrast, a post-meal blood glucose pattern that includes a steady rise, with no initial drop in blood glucose, may be related to the insulin dose rather than the glycemic index value of the food.)

*Note: there are other factors that may contribute to lows after meals, including the use of peaking background insulin such as N/NPH, too much meal insulin, too few carbs, too much basal insulin, and previous exercise, among others. Consult your child’s diabetes health care team to determine likely causes and solutions for blood glucose swings.

Choosing the Right GI for the Job

One Last Note About Breakfast Cereals

Breakfast cereals are notorious for raising blood glucose and keeping it there. One of the reasons for that has to do with the glycemic index.

This one got me! I assumed that the natural-grain-without-extra-additives state of the puffed wheat I was buying for my son made it low GI – but puffed wheat has a GI value of 80 (high GI). This was contributing to post-snack blood sugar spikes without me even knowing it. Oh, well, live and learn. ~Michelle

For more information on the glycemic index and diabetes, check out the following: