What is an Insulin Pump? How Does it Work?

If you're new to Type 1 Diabetes or just want to explore diabetes technology, this article will explain in easy-to-understand terms what an insulin pump is, how it works, and where on the body you might wear it. We also look at the features common to most insulin pumps, and provide links to other insulin pump articles for further reading.

An insulin pump is a medical device, about the size of a cell phone, used by people with insulin-dependent diabetes (Type 1, or Type 2 if you use insulin) which infuses insulin through a small cannula (made of metal or flexible “plastic”) inserted into the layer of fat under the skin and held in place by an adhesive pad. 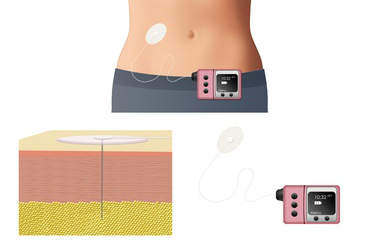 The pump also calculates a recommended dose of insulin based on the rates and ratios you have previously programmed in (called Suggested Bolus, Bolus Wizard, or similar). In addition, you can set a temporary basal rate to increase or decrease the amount of basal insulin delivered for a specified period of time. There are also options for an extended bolus to deal with high-fat or low-glycemic-index foods (such as pizza and pasta).

As one choice among different insulin program options, a pump program, also referred to as Continuous Subcutaneous Insulin Infusion (CSII), is an alternative to multiple daily injections via syringes/insulin pens (though injections are still occasionally required).

What about Infusion Sets & Tubing?

Typical sites for infusion include: the tummy/abdomen, the buttocks, thighs, and upper arm. In some models of insulin pump, the cannula is then connected to a length of plastic tubing, which transports insulin from the pump cartridge/reservoir to the infusion set; another “tubing-free” model eliminates the tubing by housing the cartridge/reservoir in a “pod” with a built-in cannula, which adheres to the skin. Either form of infusion set is replaced every 2-3 days.

Choosing the Best Site Location+ how to move it around

Which Insulin Pump Model is Best?

When you’re in the market for a new insulin pump, the choices can seem overwhelming. It may help to know that the different insulin pump manufacturers and models have more in common than you may think...

This function refers to the background (“basal”) insulin, which is delivered every few minutes via the insulin pump. In an injected insulin program, “basal” insulin includes long-acting insulin (ex. Lantus, Levemir) or intermediate-acting insulin (ex. N/NPH); however, in an insulin pump program, these are replaced by rapid-acting insulin delivered in very small amounts every few minutes; the rate at which it is delivered is called the “basal rate”, and is expressed in units of insulin per hour (U/hr). All of the pumps currently available in Canada have basal rates of 0.025 to 0.05 U/hr.

Small increments allow you to finely tune basal rates for individual needs, and are especially useful for small children and others who are particularly insulin-sensitive. To put this into perspective, a basal rate of 0.025u/hr means that 25/1000ths of a unit are being delivered every hour. If a portion of this hourly amount is being delivered every 3 minutes (for 20 portions in 60 minutes), for example, then just over 1/1000th of a unit (!) is delivered in each dose. That’s 400 times smaller than the smallest dose you can deliver using an insulin pen! These teeny tiny increments in dosing allow high precision when programming for basal insulin rates.

Although this seems like amounts of insulin so small that one step to the next wouldn’t make a difference (25 one-thousandths of a drop of insulin?! c’mon!)… for our young son (and for many others) it does make a difference. There are several hours in the day when his basal rate is set at 0.025 u/hr. We have tested and found that, at these times, one step up is too much, and one step down (a zero-rate) is too little.
~Michelle

Most pumps give you the option of switching between different (alternate) Basal Programs: you can set different rates for basal insulin delivery to adjust for anticipated differences in activity level (ex. school days versus weekends; workout days vs. non-workout days). For example, if your child is very active in school sports during the week, but spends most of her time on the weekends texting her friends as she lounges on her bed, she may need less insulin during the school week. If, however, your child is part of the chess club at school, but plays soccer and hockey on the weekend, she may need less insulin on the weekends than during the school week.

When your child’s insulin needs are less or more than usual due to a temporary cause (ex. illness; particularly active, or inactive, days; consumption of high fat foods), you can set a temporary basal rate (“temp basal”) which either reduces or increases the amount of insulin delivered for a specified number of hours (ex. 10% less insulin for 8 hours; 30% more insulin for 3 hours).

If you use the associated meter to check blood glucose, you don’t have to re-enter the reading into the insulin pump itself – it will send the information wirelessly, to be used in bolus calculations and for record-keeping. Alternatively, you can use a non-associated meter if you like (ex. a mini-meter in his pocket when your son goes skate-boarding for the morning), and then enter the blood glucose info into the insulin pump as needed.

Once you program in an insulin-to-carbohydrate ratio (I:C) of 1:10, for example (that is, you tell the insulin pump that your child needs 1 unit of insulin for every 10g of carbs) the bolus calculator will do the math for you, giving a suggested insulin dose for the number of carbs you dial-in for a particular meal. For example, for the above insulin-to-carbohydrate ratio (I:C) of 1:10, if your child plans to eat 52g of carbs at lunch, it will suggest a dose of 5.2U of insulin.

In this case, the math becomes more complex; the bolus calculator becomes more and more handy the less and less “round” your numbers are. It’s also very useful for young children or individuals with special needs to operate their insulin pump independently – they don’t have to be able to do the math at all, they just have to know how many carbs are in the food in front of them.

In the same way, the pump bolus calculator will also do the math for corrections of above-target (and below-target) blood glucose, based on your programmed Insulin Sensitivity Factor (ISF). The pump will do the math for you to calculate the units of insulin needed for a given blood sugar reading, based on the ISF you have programmed in.

At meal times, it will also combine these two recommended doses (for carbs and for BG correction), presenting you with a recommendation for the total dose.

This feature made a world of difference for my 5-year old son – especially at school. With the help of the bolus calculator in his insulin pump, he could deliver his own insulin at Kindergarten, as long as I sent along a stickie note with the total carb amount written on it. He could then dial-in 39 g of carbs, for example, and let the insulin pump do the math, leaving him only to “scroll up” to match the number of units suggested by the insulin pump. -Michelle

Correction Factors or Insulin Sensitivity Factors (ISF) (that is, the amount of insulin given to treat high blood glucose) can vary at different times of the day, with the amount adjustable by the user.

With the Active Insulin Remaining function, the pump will calculate how much insulin is still acting from the last bolus for food or for high blood glucose. Certain models, under certain circumstances (ex. below-target blood glucose reading) may subtract that amount from the current bolus recommendation (which may prevent a low later).

An Extended Bolus (also known as a Square Wave, Dual Wave or Combo Bolus) allows you to spread out the total bolus over time. This comes in handy if you eat a food that digests slowly, or if you’re grazing at a party, or if you're eating “tricky” foods like pizza.

Insulin can be delivered in pre-set increments at the push of a button, allowing quick and discrete insulin delivery, as well as insulin delivery for individuals with compromised vision, who may have trouble reading the pump screen.

Insulin pumps keep track of every bit of insulin delivered and when, as well as glucose readings entered manually or shared from a linked meter or Continuous Glucose Monitor. (Plus things like Total Daily Dose, and other summary data.) This empowers you to look back and get the facts, so you can figure out what went wrong when things don’t go as planned. It also provides the info needed to decide what to do now. The pump’s history is a great safety and glucose management tool.

Although it seems most insulin pump users have a favourite, there is no such thing as the “best” insulin pump in absolute terms; the best insulin pump for your child is the one that has features that fit your family’s values and lifestyle, and minimizes the features that you don’t find desirable. With that in mind, all the best on your pump hunt!