The New Language of Diabetes

Learning about T1D: A Crash Course in Metabolism & Endocrinology

When our son was diagnosed with type 1 diabetes (T1D), my husband and I found we had a whole new language to learn. Understanding the following terms helped us navigate the new terrain:

Endocrinology is a branch of medicine that focuses on the regulation of body functions by hormones (of which insulin is one) and the effect of those hormones on how the body and its systems function. Your child’s diabetes doctor is most likely an endocrinologist. 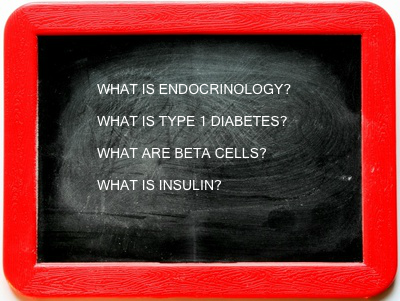 Insulin is a hormone which is required in order to move glucose from the blood stream into the cells of the body, where it can be burned as fuel (that is, converted into energy) to support all of the body’s activities. Here’s one way to think of it: all cells have doors on them; insulin is the key that unlocks and open the doors before glucose can get into the cells from the blood stream.

Insulin is produced in the pancreas, an organ just behind the stomach; particular cells in the pancreas, called beta cells (sometimes denoted as ß, and located within areas of tissue called the islets of Langerhans), make and release insulin. Normal beta cells release exactly the right amount of insulin to move glucose into cells, where it is burned for energy or stored for future use in your liver as glycogen. If blood glucose begins to fall, counter-regulatory hormones (such as glucagon, epinephrine, growth hormone, cortisol) move glucose from the liver and muscle stores into the blood to provide the fuel the body needs. Insulin also helps your body turn amino acids into proteins and fatty acids into body fat.

Healthy beta cells release insulin into the blood throughout the day (background, or basal insulin), which allows stored fat and glucose to be released in the right amounts to support metabolism during times when we are not eating and not active. About half of the total insulin released in a day by a person who does not have diabetes is used for this basic metabolic need.

In individuals with type 1 diabetes, the majority of these beta cells have been destroyed, requiring replacement of insulin via injection or insulin pump infusion. The rest of the pancreas, however, remains healthy; it continues to produce digestive enzymes, and the alpha cells in the pancreas continue to produce glucagon (a hormone which signals the liver and muscles to release glycogen, or stored glucose).

Metabolism is a process in which the body burns fuel, releasing the energy from the food we eat, so that it can be used by our body to power our muscles for movement, to produce body heat, and for continual growth, renewal and repair of the billions of cells that make up our bodies.

Glucose is the preferred source of fuel for metabolism; it’s a “clean” energy source (that is, the burning of glucose produces almost no polluting by-products). When you eat, your digestive track breaks down carbohydrates into simple sugars (Glucose is by far the most important of these sugars) that are small enough to be absorbed into your bloodstream. Glucose is relatively “useless” when it is in the bloodstream – it is only when it is moved into cells (with the help of insulin) that it can be used by the body for energy. Along with glucose, the body normally burns small amounts of fat and protein as fuel.

The body needs a certain amount of energy in the form of glucose to support its basic metabolic needs. That is, even in the absence of body movement (such as when we are sleeping), the cells of our body’s organs need glucose. It is needed in the cells of our brain to think, our lungs to breathe, our heart to beat, and our muscles to move. The brain and nervous system are especially sensitive to this need for the correct amount of glucose in the blood at all times.

Above and beyond this basic metabolic need, our bodies need fuel to power the cells of our muscles so that we have enough energy for any kind of movement, from lifting a book or a fork, to engaging in exercise or sports. Clearly, the more strenuous an exercise, the more energy will be needed, thus the more fuel (glucose, etc) will need to be converted into energy.

The goal of effective diabetes management is to balance the body’s demand for insulin (by injecting insulin via syringe or infusing insulin via an insulin pump) with its current supply of glucose. This balance is affected by a number of variables. Carbohydrate containing foods, illness, stress/excitement, and hormones (such as growth hormone) all increase blood glucose, while activity/exercise, insulin, and hormones all decrease blood glucose. In addition, things like time of day, seasons/weather , the type of food we eat, the timing of insulin delivery, where and how we deliver insulin, and the type of insulin we use can all affect this balance.

If There is an Insufficient Supply of Glucose

During metabolism, if there is insufficient supply of glucose, the body will use less-efficient fuel sources (fat and protein) for energy. This is an abnormal process of fuel metabolism, which creates higher than normal levels of “polluting” by-products: when fat is burned, ketones are produced as a waste-product. Ketones are molecules that are highly acidic; in large quantities, they upset the pH balance of the blood, tissues, and organs of the body, thereby interfering with their proper functioning. If this happens, a condition called Diabetic Ketoacidosis (DKA) results.